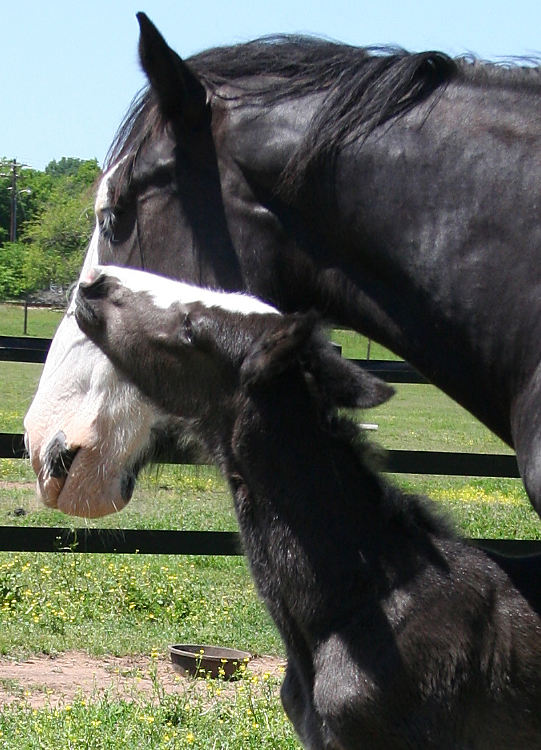 Sendera Draft mare Oubliette d'Acier with her dam, The Jinx.

A History of the Sendera Draft Horse

At the turn of the 20th Century, there were over 13 million horses in the United States, over half of which were draft or part draft. Thousands of heavy horses were imported from Western Europe: Percherons from France, Belgians from Belgium, Shires from England, and Clydesdales from Scotland, to name a few. Once they arrived, many were bred with local horses - the predecessors of American breeds like the Appaloosa, Quarter Horse, and Morgan - to supply the demand for animals able to handle the hard work necessary at the time.

The draft horses who remained were employed primarily in the carriage horse industry, pulling decorative carriages for weddings, leading sightseeing tours in large cities, and working in areas where a motor vehicle was not practical or allowed. These horses were chosen for their ability to work well and look beautiful doing it. Owners rarely cared about their horses' registration, looking instead for an advantage over their competition. A flashy coat was one of the most obvious ways to stand out in the crowd.

So, a few select breeders began to cross their stock with loudly-marked light horses. Different groups emerged, those with pinto markings and those with appaloosa patterns being the most obvious. Over the next few decades, the number of unregistered horses grew, and multiple registries were formed to track them. Then, at the end of the 20th Century, draft horses finally began to regain their popularity with horse owners.

The Sendera Draft horse is one of many breeds that came from this convoluted horse history. Like the American Cream Draft, the North American Spotted Draft, the Gypsy Vanner, and the Drum Horse, our founding stock was chosen based on unique qualities no other draft horses possessed. Many came from specific farms that had dedicated decades to producing the ideal horse of its type. These horses were well known to enthusiasts in their circles, but invisible to the vast majority of the horse community because there were simply so few.

In 2008, a selection of appaloosa-colored drafts drew the attention of a draft-loving Texas woman. These horses looked nothing like the more popular breeds of drafts, with a distinct conformation that was consistent throughout the twelve remaining horses. She saw their potential and decided to help revive these beautiful creatures. There was one major problem, however: the only available horses were all related to each other.

The owner of these horses revealed that he'd kept a small registry for many years, but there were no longer any other breeders. After months of discussion and planning, all of the registry's documents and records, along with 5 incredibly unique horses, were sent to Texas. This small herd was leased out to the woman who would become the first Registrar of the SDHR. She strongly believed these animals were something special and deserving of worldwide recognition. 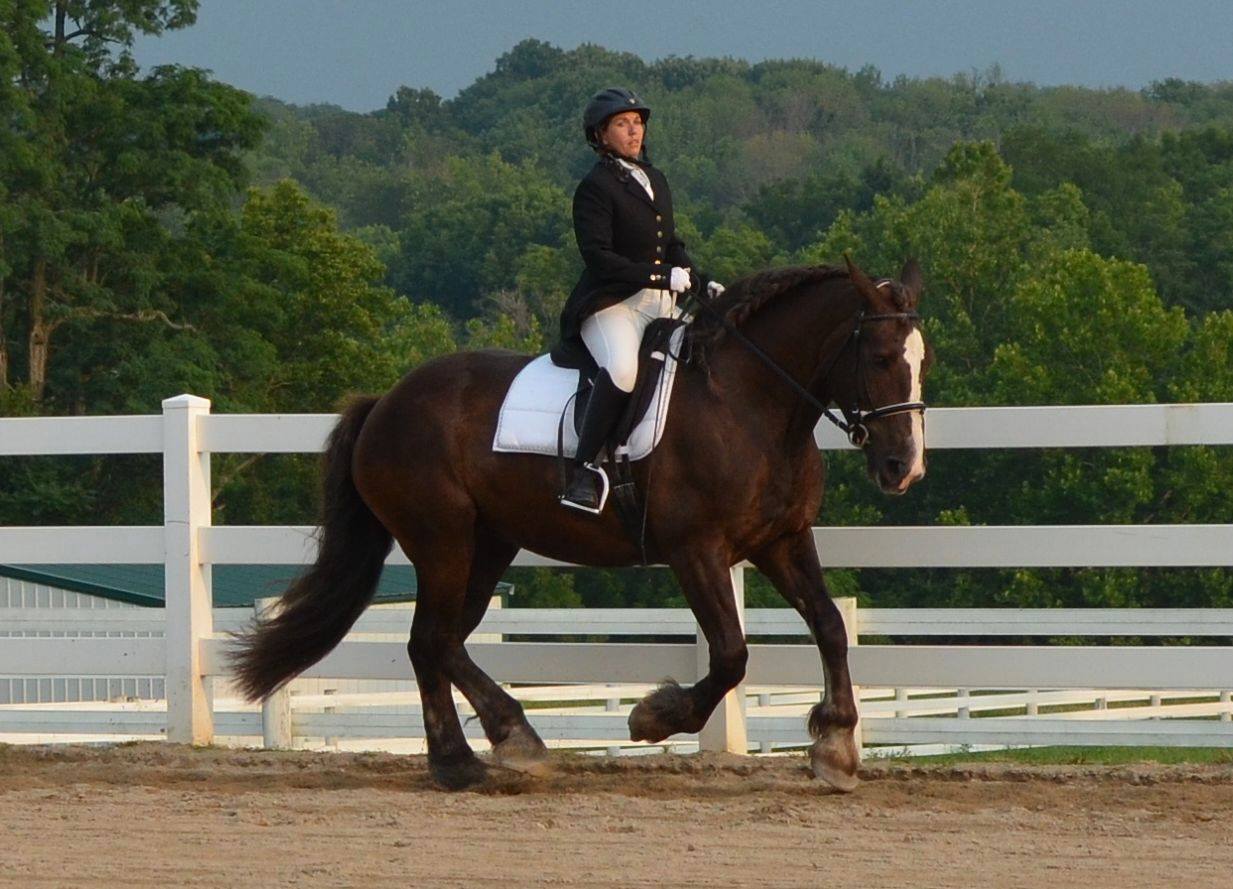 This began the SDHR and the breed's revival project.

Additional horses from the initial registry were tracked down through social media and horse community forums. The conformation of these original horses was analyzed to find the ratios that made them so unique, and a breed standard was created based on these initial findings of conformation and temperament. Then, experts with the Livestock Conservancy were consulted for guidance on how to save these magnificent animals without simply changing them into colored versions of another breed. Most importantly, the Registrar had begun breeding those initial horses with others of a similar type and found the traits bred true. Over and over, each of the resulting foals showed the conformation that made them so different from most pulling draft breeds. Some were colored loudly, others were not, but the style of horse appeared to breed consistently.

Unfortunately, one breeding program would not be enough. Others needed to get involved, which meant rules about how to maintain the desired type had to be written. When restoring endangered breeds, there are three main options to grow the population. The first is crossing out to similar breeds and registering the offspring. The second is choosing crosses based on calculations to determine the amount of inbreeding. The third is to seek out animals who exhibit the desired traits, but come from varied or unknown backgrounds, and use them as foundation stock. The first option runs the risk of increasing the traits not typical of the original horses. The second option could greatly increase the genetic diseases in the breed due to recessive genes. Therefore, the SDHR chose to go with the third option, even though it wouldn't be as easy.

The SDHR opened the Foundation Program in 2008, and until 2013, horse owners were allowed to submit their horses for evaluation. Those that were within 70% of the conformational ideal and who did not carry any unwanted color genes were allowed to apply for Foundation Registration. These horses were granted acceptance as full SDHR horses, with no restrictions on their potential for breeding, beyond the minimum draft percentage required in their foals. Only 38 horses were selected during that time, but their foals were the solution the breed registry had been hoping for. Finally, the SDHR saw an increase in registrations.

In 2013, new genetic tests were being discovered, making it easier to rule out unwanted issues, and the SDHR embraced them. With extinction no longer a real threat for these magnificent animals, the Registry began encouraging breeders to test their horses for genetic diseases and formed a program to focus on breeding out any known defects. New requirements for registration and approval were also implemented to include these genetic tests for any newly registered horses. At the same time, the SDHR believed enough horses were registered to move into the second stage of revival, which would solidify the breed’s ideal appearance. With the breed finally beginning to thrive, the former Registrar announced her intention to step down from running the registry, leaving the care of the breed to the very capable staff of the SDHR.

Now, over a decade after the first horses arrived in Texas, the Sendera Draft is a unique breed of horse that is finally getting the attention it deserves. While most people recognize the loud appaloosa-style patterns as one of its most defining traits, even the solid-colored horses turn heads. As a great horseman once said, "You can't ride the color," and the SDHR agrees. Our goal as a Registry is to maintain a draft horse with a riding conformation. It doesn't matter if those horses have the eye-catching color patterns or are solid - what makes these horses truly unique is their upright conformation; their smooth, enjoyable gaits; and the try-it-all personalities that every horse owner dreams of. 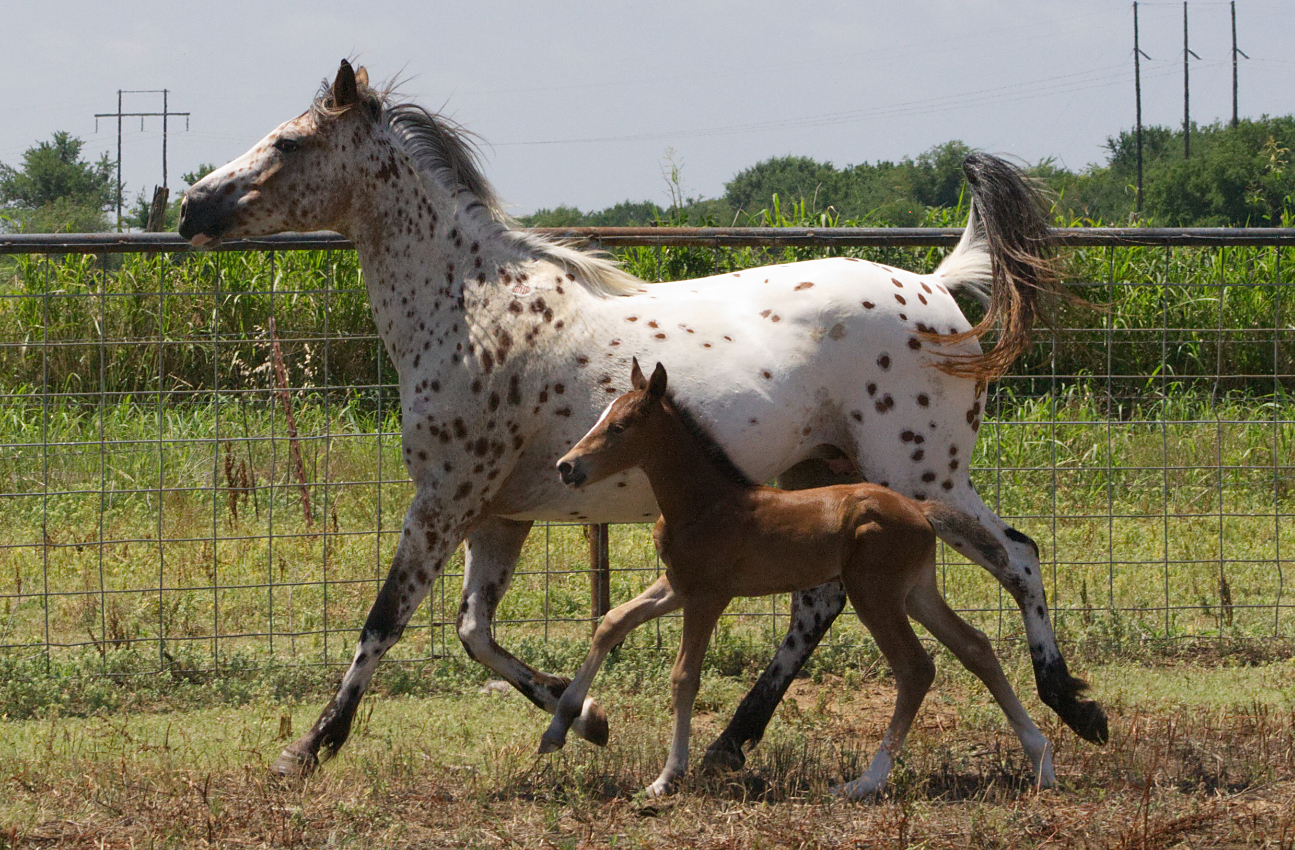 Approved Cross mare Adelaide Fever and her Sendera Draft foal After the Storm.

While the breed is still very small, foals are registered each year and the SDHR is continuing to grow. With every generation, the breed moves closer to the goal of closing the books. Best of all, the Revival Project has proven to produce a consistent and genetically diverse horse that is unlike any other. Like many breeds, these horses may have started as an amalgamation of ideas, but the Sendera Draft Horse Registry believes they have proven themselves to truly be something special.

Return to the top